CALL US NOW
TEXT US NOW 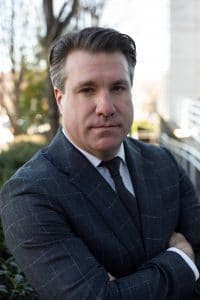 Bryce Angell was born in New Orleans, Louisiana, and grew up in North Georgia. Spending time in his father’s law office as a kid, Bryce began learning the art of practicing law at an early age. As just a youth, Bryce developed a sense of justice and a passion to stand up for the rights of others who are in need of help, and that is why Bryce Angell decided to become an Atlanta personal injury lawyer.

Bryce moved on from his father’s law office to acquire a business degree from the University of South Carolina-Spartanburg and a J.D. from John Marshall Law School. He then began his career working for a prominent personal injury law firm in Atlanta. He has since established The Angell Law Firm, LLC, an Atlanta-based law firm that primarily practices personal injury law.

Bryce is considered a highly esteemed trial lawyer and a passionate client advocate amongst his peers in the Atlanta legal community. Never afraid to go the extra mile for his clients, Bryce Angell works tirelessly to ensure that each client’s personal injury case gets the attention that it deserves.

Bryce has helped countless clients with settlement negotiations and has successfully litigated cases in both state and federal courts. Bryce has a passion for trial work and believes that those who have been injured by the actions of others deserve their day in court. He is a member of the State Bar of Georgia, the American and Atlanta Bar Associations, the American Association for Justice, and the Georgia Trial Lawyers Association.

Bryce Angell is currently admitted to practice in the State and Superior Courts in Georgia, the U.S. District Court Northern District of Georgia, U.S. District Court Middle District, and the Georgia Supreme Court. He is committed to serving those who have been wrongfully injured and who want to fight the insurance companies for the settlement they deserve and to be made whole again. If you have been injured in an accident due to the negligent behavior of another, Attorney Bryce Angell will work diligently to get you the best possible outcome for your case.

Attorney Bryce Angell has had many personal experiences with accidents and other causes of personal injury claims. For instance, Bryce vividly remembers when he was a child, and his brothers suffered serious injuries in an automobile crash.

Bryce can remember how he felt like the family member of a car accident and personal injury victim and he understands firsthand what it is like when you or a loved one is injured in an accident. This tragic experience has given Bryce an overwhelming sense of empathy for all of his clients and is evident in his effective and compassionate legal representation.

Practicing personal injury law for the duration of his legal career, he has handled all types of personal injury claims, including claims based on negligence, animal attacks, car accidents, premise liability, and wrongful death.

Get Started Today
With A Free Case Evaluation

I chose this law firm due to the great reviews that I read online, and it was the best decision i’ve ever made! From start to finish the staff at Angell handled my cases really well. They are very professional, they know what they’re doing, and they have no problem answering questions and taking time to walk you through the process. When dealing with big insurance companies, it’s great to have a team to help negotiate to get what you truly deserve. Special thanks to Annie and Deanna as I worked more closely with them but the entire staff is amazing! If you need a lawyer I definitely recommend them. Thanks so much!

This was my first experience with Angell Law Firm so I didn't know what to expect. My case manager was Breanna and she was very professional, adamant and efficient. I was so impressed with how fast she was with the process in its entirety. If anyone ask which law firm to team up with I will recommend Angel Law Firm. Thank you so much.

I used the Angell Law Firm for a car accident that I had. From beginning to end they were very knowledgeable of the process and answer all my questions, the staff was very professional and extremely helpful with all the process. What I like the most is that no matter how many times I call, to follow up with my case they would always answer my call in a courteous way and if they can't they would immediately return my calls. I was very happy with the outcome of my case and how they make it easy for me to go through this process. I will recommend them to anyone in need of a good injury lawyer. Elida Castillo and Breanna Baggio were very kind and courteous and professional.

This comment is about Bryce Angell and Law Associate with his frim ,I tell you the truth and nothing but the truth after going through lies, not getting return phone calls delay after delay about my case. So after about seventeen months I decide enough is enough.I call the Angell Law Frim and talk to their legal team and they accepted my case. The next few hours a representative came out to talk to me and was straight forward expertise advice took my filed and the next month my case had settle for a lot more than what I was told that I could get from the previous Attorney. The Angell Law Firm is very transparent and will not keep you in the dark and will return your call back . The Angell Law Firm let you know they work for you and not the other way around. (very professional):) James